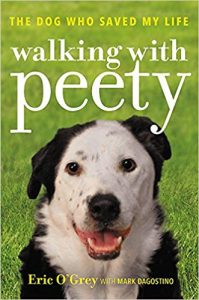 “Walking with Peety: The Dog Who Saved My Life” by Eric O’Grey

Eric was 150 pounds overweight, depressed, and sick. After a lifetime of failed diet attempts, and the onset of type 2 diabetes due to his weight, Eric went to a new doctor, who surprisingly prescribed a shelter dog. And that’s when Eric met Peety: an overweight, middle-aged, and forgotten dog who, like Eric, had seen better days. The two adopted each other and began an incredible journey together, forming a bond of unconditional love that forever changed their lives. Over the next year, just by going on walks, playing together, and eating plant-based foods, Eric lost 150 pounds, and Peety lost 25. As a result, Eric reversed his diabetes, got off all medication, and became happy and healthy for the first time in his life-eventually reconnecting with and marrying his high school sweetheart.

Join us at 7:00 pm on Thursday, October 10 at the St. Henry Branch Library