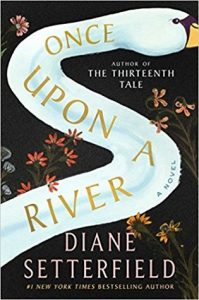 Once upon a River by Diane Setterfield

When a man bursts into a riverside inn on the longest night of the year, covered in blood and carrying a dead child, the patrons of the Swan are beyond thrilled to find themselves in the middle of a swiftly unfolding tale—especially when the child is determined to actually be alive. Is the mute girl the long-missing daughter of a nearby wealthy family, or the bastard child of woman who threw herself in the Thames only a day or so earlier? Inquiring minds want to know. Weaving among the turmoil is a buoyant dance between science and superstition, as Darwin’s ideas, psychiatry, and scientific observation waltz with skullduggery, a curiously wise pig, and a man—or ghost—who patrols the Thames. As Setterfield (The Thirteenth Tale) juggles a colorful mob of characters whose lives are upended by the mysterious young girl, the joy of storytelling permeates every moment in this lively and wise historical novel. –Adrian Liang, Amazon Book Review

Join us at 7:00 pm on Thursday, September 12 at the St. Henry Branch Library